The Rising Sun Lady Shiners opened conference play Wednesday night against the Lady Indians of Milan. Milan scored 3 minutes into the game and controlled every aspect of the game. Rising Suns defense could not hold back the attack of the Indians and allowed 3 more goals before half digging their deficit to 0-4.
At the start of the second half Milan was quick to score again and added to more goals to their lead. The Lady Shiner was spread thin and the Lady Indians attack outnumbered the Shiners back line. The Lady Shiners would break the shutout and get a goal from Senior Kinsey Price. With time running out Senior Sydney Pitts would add to the Shiners goal total but the game was already decided early. Lady Shiners would fall 6-2. 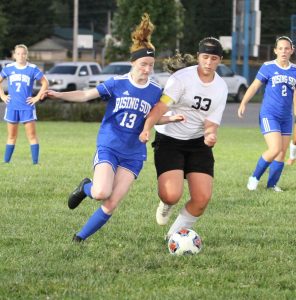